University of Maine at Farmington 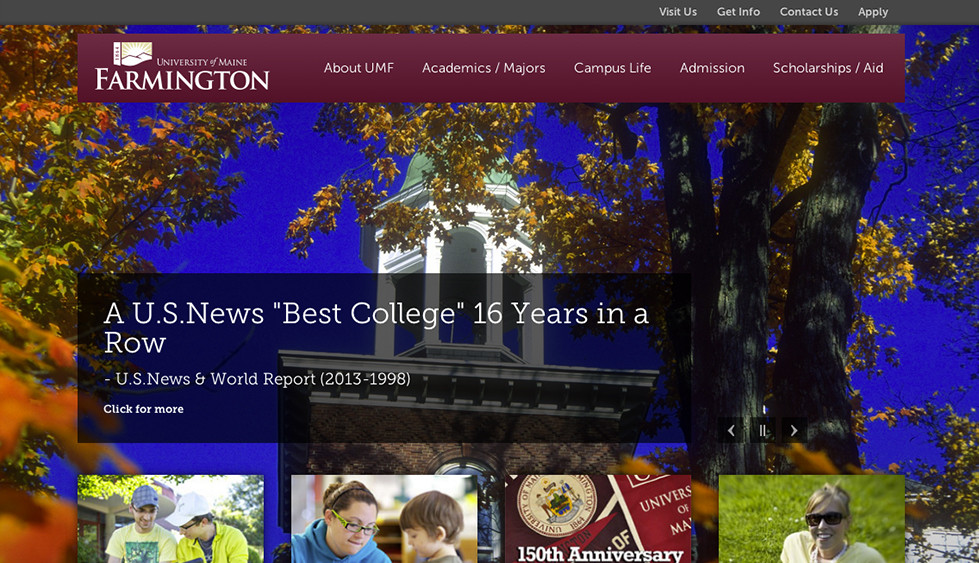 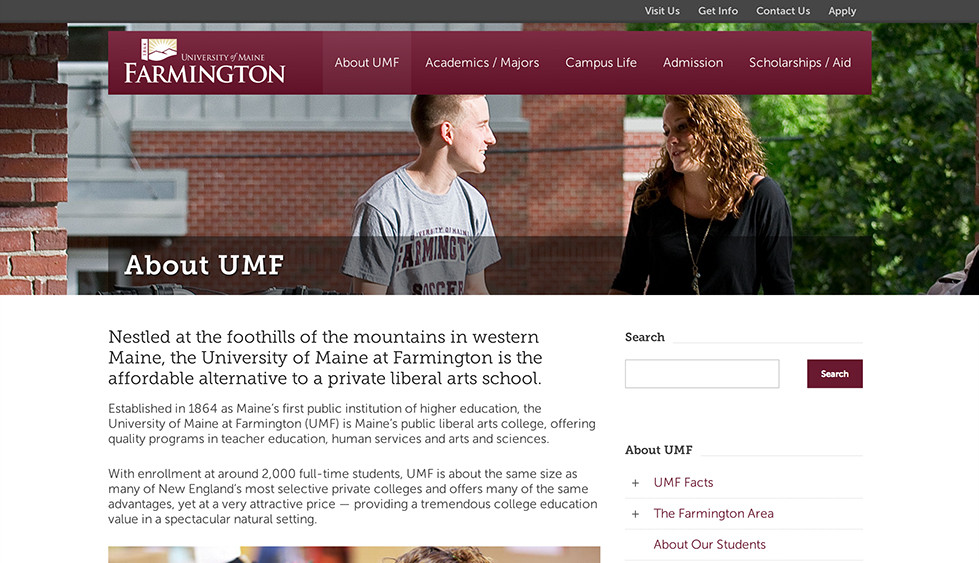 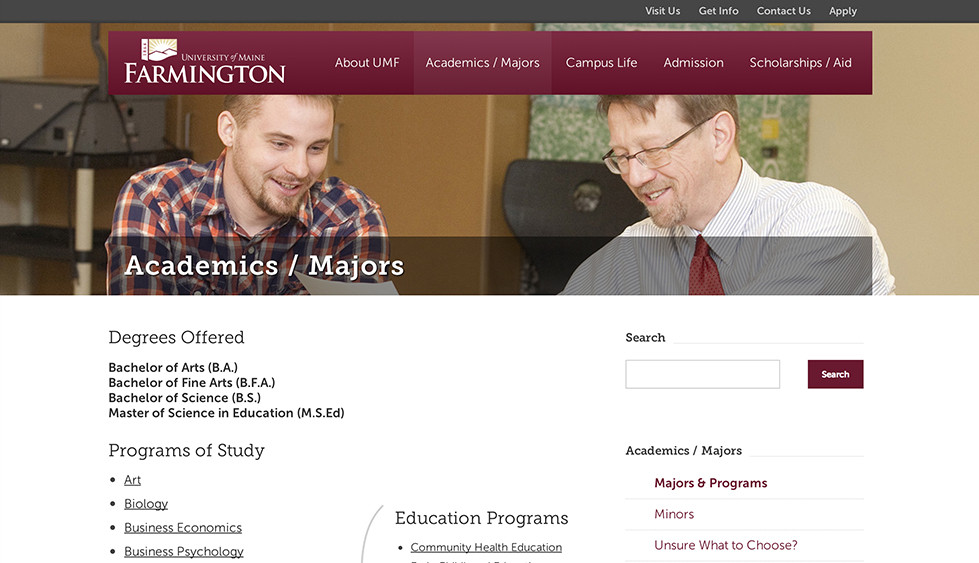 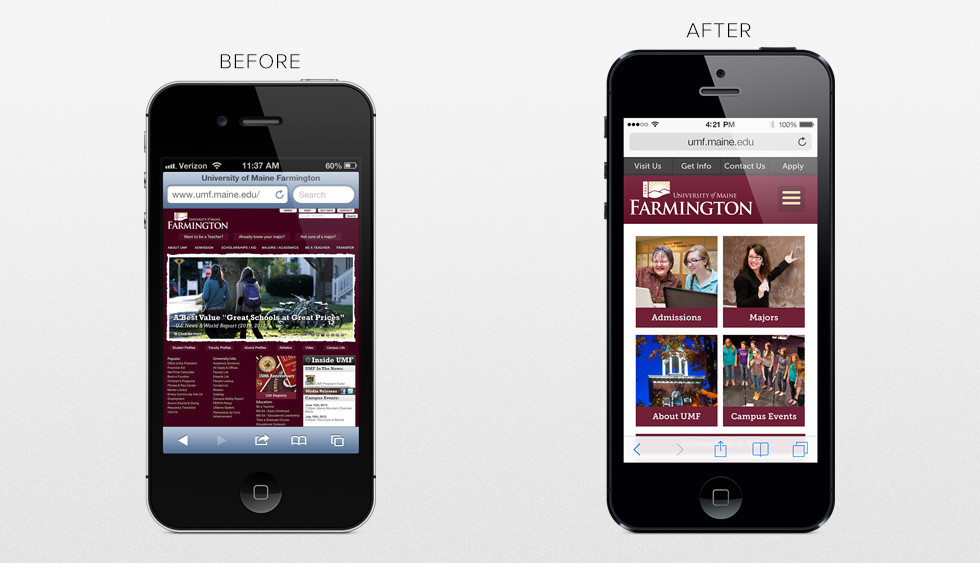 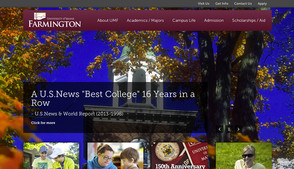 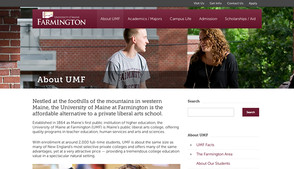 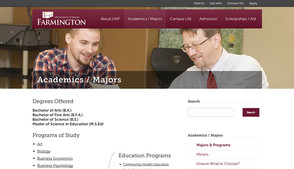 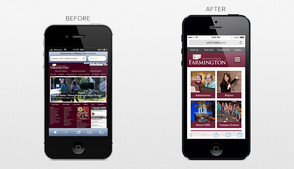 The University of Maine at Farmington approached us to help them with their new redesign. They had started the process but they needed some outside help to finish the job. This grew into one of the larger jobs that we have done.

"UMF was in a bind when our web graphic designer left the University at a critical stage of our developing an all new university website. We were pretty far along and had much of the template designed but we had no way to implement the complete re-design of our sprawling, complicated site, which included loads of dynamically-generated content. We needed a talented, fast and affordable web development partner and Aptuitiv proved to be all of that." - Tom Donaghue, UMF Marketing

Their marketing team had originally planned to do the site in multiple phases with a mobile website the focus of phase two. We strongly advised that they include a solid mobile strategy in the first phase of the redesign. A lot of the website's audience would be students on campus which almost guaranteed that they would use their phones to access the new website.

"Our previous website was built before smartphones and tablets came into common use, so it was clunky and not mobile-friendy whatsoever. We knew we needed to be in the mobile game with our new site and were originally planning to do mobile as a phase 2 project. Aptuitiv convinced us to build the new site to be mobile-friendly right from the get-go, top to bottom, rather than after the fact. We're glad we took their advice. Not only did they build us a mobile-friendly site at least six months ahead of schedule, but doing so saved us money we would have otherwise spent retro-fitting the site later on. Within hours of the soft launch we were already hearing from people who were thrilled the University finally had website that worked seamlessly on mobile devices, which is critical for a college looking to appeal to high schoolers." - UMF Marketing

UMF had already settled on a design but there was a lot of work to be done with the content and coding for the site. Much of our work was spent reworking the HTML, CSS, and Javascript of the website to fully support a responsive design. We also did a lot of work with images and consulted on the information architecture of the website.

The site was built in Wordpress, which presented a number of challenges. We implemented a number of plugins to meet the needs of the site and to make the administration easier to work with. One of the largest challenges was how to handle the navigation. We wanted to make sure that someone on a mobile device could easily access all of the website through an intuitive navigation menu. Through some custom development, we were able to make it so that the same navigation menu could be used to manage the primary navigation on the desktop site and on the mobile site, even though there are significant differences in how they are displayed. We also enabled it so that the navigation on the side of the page is automatically pulled from that same primary navigation menu based on where you are in the website.

"Aptuitiv first helped us re-focus our new site's navigation on a stronger user-based concept which allowed us build our site smarter and with better Search Engine Optimization in mind." - UMF Marketing

The response to the new website has been very positive. One of the major goals of the new website was to improve its usability. The new design and architecture has made it a lot easier for visitors to find the content that they are looking for. The solid mobile strategy also makes it possible for the website to be easily used on a desktop computer, tablet, phone or other mobile devices.

"The result is that UMF now has a website that looks great -- and works great -- on smartphones and tablets in addition to laptop and desktop computers. This was a huge change from where we were three months ago." - Tom Donaghue, UMF Marketing

Some closing words from their marketing director:

"Working with the team at Aptuitiv was great. They responded quickly to our needs, provided good advice, kept us on task, and were patient as we learned to use the CMS. No question was too basic and nothing seemed to get them flustered as we pulled off a complex new website in just four months -- something other companies said would take us at least six to nine months to launch."